At a ceremony in Belgrade to mark Serbian Statehood Day, Johnny Depp was presented with a state honour for “promoting Serbia”, alongside prominent Serb politicians from Bosnia and Montenegro. 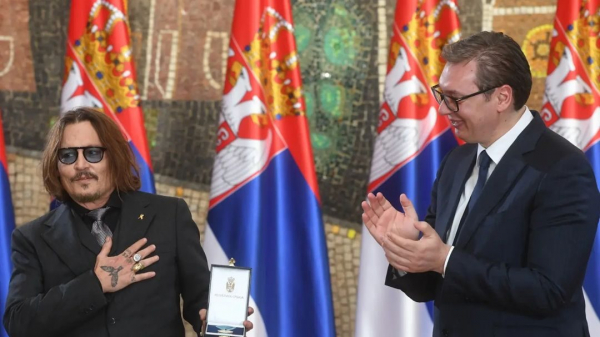 Serbian President Aleksandar Vucic on Tuesday gave Hollywood star Johnny Depp a gold medal for “outstanding merits in public and cultural activities, especially in the field of film art and the promotion of the Republic of Serbia in the world”.

Vucic presented the medal to Depp at a Statehood Day ceremony in the Serbian capital, and also gave honours to political representatives of Serbs in the Balkans, former fighters in the Kosovo war and others.

Depp, who has been involved in a couple of projects connected to the country in recent years, including the shooting of scenes in Belgrade for the feature film ‘Minamata’ and a leading role in Serbian-produced animated series ‘Puffins Unlimited’, said he was proud to receive the award.

“I truly, sincerely thank you, President Vucic, and this medal of merit, if I am given the honour to walk away with this, I thank you for being kind enough to bestow it upon me,” Depp said.

Depp was the centre of controversy last year when the decision by Spain’s San Sebastian Film Festival to give him a lifetime achievement award was criticised by women’s rights groups after the actor lost his libel case against a newspaper that published allegations that he assaulted his ex-wife.

Depp was also warmly welcomed in Serbia in 2010 when he visited the Kustendorf film festival and met the president at the time, Boris Tadic.

A Tuesday’s ceremony, the country’s highest award, Order of the Republic of Serbia, was given to Zeljka Cvijanovic, the president of Republika Srpska, the Serb-majority part of Bosnia and Herzegovina.

“For a politician, a representative of the citizens of the Republika Srpska, there is no greater honour or recognition than the one that fraternal Serbia can show,” Cvijanovic said at the ceremony.

The Order of the Serbian Flag of the First Degree was given to Milan Knezevic, a Serb politician in Montenegro. 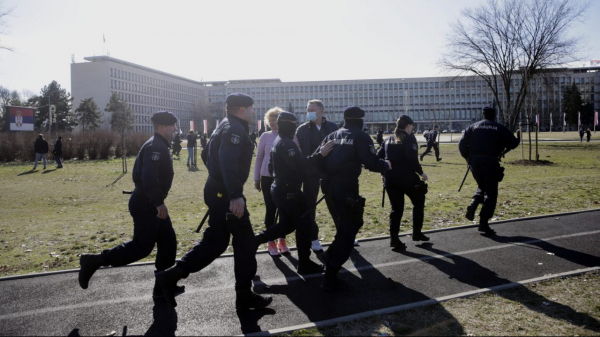 Also at the ceremony, the Sretenje Order of the First Degree was received by Serbian Orthodox Bishop Pahomije on behalf of the Prohor Pcinjski Monastery. In 2003, Bishop Pahomije was charged with sex abuse offences and was summoned to appear before a closed court in Vranje. The charges were brought on behalf of four teenagers, the youngest aged 13.

He was acquitted but Serbia’s Supreme Court eventually ruled that the two verdicts clearing him were unlawful, although the court was unable to order a retrial because of double-jeopardy laws. Similar accusations repeated in 2013.

The Order of the Karadjordje Star of the First Degree was given to John Cappello, president of the Halyard Mission Foundation, for “special merits on the preservation of the historical heritage of Serbia and the culture of remembrance of the Halyard mission”. The mission, which saved several hundred US airmen in Yugoslavia during World War II, was led by the Serbian nationalist Chetnik movement.

The Serbian president also posthumously decorated the former Serbian ambassador to Russia, Miroslav Lazanski as well as a former police officer who commended Special Police Units in Prizren during Kosovo war, who participated in an operation to save Serbs in the town of Orahovac in 1998.

During the ceremony, near the building where it was held, a group of environmental associations and NGOs demanding a permanent ban on lithium excavation staged a blockade of main streets. One person was arrested after breaking through the blockade with his car and hitting a protester. 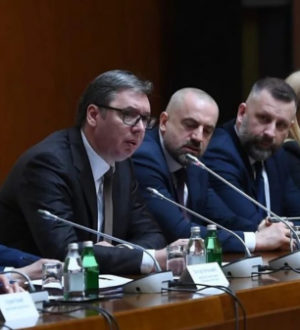 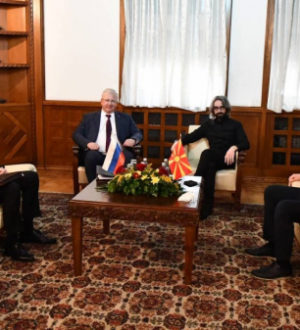 North Macedonia’s Left Condemned for Aligning with Russia on Ukraine 18.03.2022 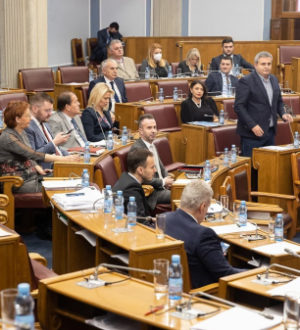